Why Should We Worry about Air Pollution? 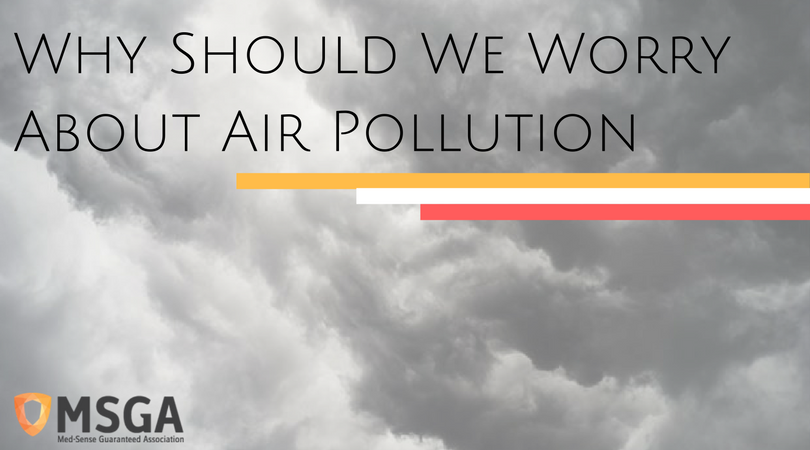 Changes in the environment aren’t things we generally like to think about. But considering that the effects of environmental pollution and climate change can affect our health, our access to clean air and water, and a healthy ecosystem, the quality of our air has a serious impact on many aspects of our lives and those we share the planet with. While our day-to-day lives may not feel threatened right now, air pollution has a compounding affect that will only grow worse without intervention. Why should we worry about air pollution? Read on to learn about some of the dangers of poor air quality you may not know about.

What Is Air Pollution?

Air pollution occurs when hazardous chemicals enter the environment through a variety of natural or man-made activities that can negatively impact human health and the environment. The increase in energy demands such as the combustion of fossil fuels in the last hundred years is directly responsible for the negative changes in our atmospheric composition. From air pollutants such as nitrogen oxides, ozone, carbon monoxide, heavy metals, volatile organic compounds, sulfur dioxide, and respirable particulate matter, we are being bombarded with potentially toxic pollutants.

According to the Environmental Protection Agency (EPA), people exposed to toxic air pollutants can suffer from an increase in cancer and other serious health effects. Other adverse health effects include:

Increase In Elderly And Infant Deaths

In a study of more than 22 million elderly deaths, the Journal of the American Medical Association (JAMA) found that daily changes in ozone and fine particulate matter resulted in higher death statistics when ranges were higher, even when the levels were lower than current air quality standards. Additionally, in a birth study by the Environmental Influence on Ageing in Early Life (ENVIRONAGE) of 641 mothers and newborns, mothers with higher levels of exposure to specific particulate matter gave birth to infants with significantly lower telomere length, unexplainable by other factors, such as socioeconomic class. Telomere length is a biological aging marker related to life expectancy. Why should we worry about air pollution? If you have loved ones that are elderly or expecting, it can affect their mortality rates.

All animals, wildlife, insects and invertebrates are vulnerable to harm from air pollution. Persistent organic pollutants (POPs), heavy metals, acid rain and other toxic substances can decimate animal populations, and cause deformities in the entire animal kingdom, including birds, fish, mammals and birds. Air pollutants can poison disrupt wildlife endocrine function, lower reproductive rates, cause vulnerability to disease and stress, and cause organ injury and death. Like the proverbial canary in the coal mine, other animals being affected by air pollution is a huge warning to humans. Toxic air quality can harm animals in two important ways:

Ozone, fluorides, nitrates and sulfur dioxide have been proven to damage plant leaves resulting in leaf drop and plant death. Other toxins such as nitrogen dioxide can cause slow leaf growth, and carbon dioxide from car exhaust can stunt plant growth. Weakened plants can suffer from more diseases and insect infestation. According to the United States Department of Agriculture (USDA), ozone from gasoline engines and fossil fuel cause the most damage to plants, and has been shown in studies to reduce crop plant production among several main food sources such as field corn, sorghum, soybeans, winter wheat, peanuts and cotton, some by as much as 50 percent. When plant life is damaged, there is less food resources available for humans and other animals.

Impact to the Food Chain

Why should we care about air pollution? Because it tends to build up the further it works up the food chain. For example, because heavy metals accumulate over time and when they move up the food chain, most health experts recommend minimizing consumption of salmon, due to the concentration of mercury in their flesh. Smaller aquatic life damaged by pollutants gets eaten by larger predators and they in turn are eaten by larger predators. Apex predators at the top of the food chain such as eagles, grizzly bears and even humans can get a toxic dose of harmful pollutants through this food chain concentration. Changes in species abundance can affect the health of not only other species, but humans as well.