Tick Bites Are Making Some People Deathly Allergic To Meat 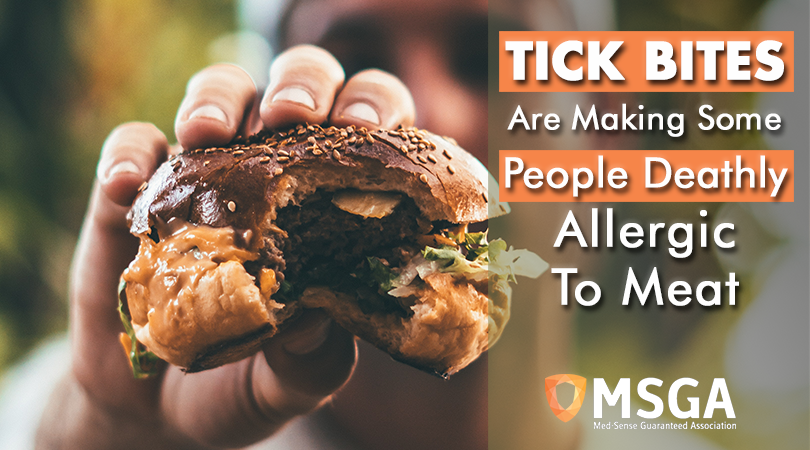 Food allergies had spent a lot of time in the national media’s spotlight recently. Some of the examples of this include the price hikes on the EpiPen that many people depend on for safety and the recent focus on GMOs and Celiac Disease. Over the past few months, another example of a food allergy that has gained traction is the potential for people to develop an allergy to meat. In addition to being a great source of protein, meat is also high in a number of vitamins and minerals, such as iron. If people develop an allergy to meat, they may struggle to keep up their intake of iron, which could have serious health consequences. One of the ways that people may develop an allergy to meat is through a tick bite. How does this happen and what are the consequences?

Tick-Borne Illnesses can be Serious

Most people have been taught from a young age that tick bites can lead to serious diseases. Perhaps the best-known tick-borne illness is called Lyme Disease. Named after the town in which it was first described (Lyme, Connecticut), Lyme Disease can be fatal. It develops after a tick bite and the hallmark symptom is a rash that develops in the shape of a target or a bull’s eye. Those who have Lyme Disease will start to feel a wide variety of other symptoms, such as fatigue and malaise; however, if Lyme Disease goes untreated, this can actually cause cardiac damage which could lead to long-term consequences. The most important treatment of Lyme Disease is to make sure that the tick has been removed. Remember, it can hide in the hair.

Another deadly disease passed by ticks is called Rocky Mountain Spotted Fever. This is endemic almost exclusively to the Carolinas and is marked by a diffuse, petechial rash. Other symptoms include nausea, vomiting, joint pain, fever, fatigue, and malaise. Some people will also develop an altered mental status and become disoriented. Inability to handle bright lights and loud sounds is also common. This disease is fatal if not caught early and treated appropriately. The treatment is an antibiotic called doxycycline.

How Does a Tick Bite Make People Allergic to Meat?

People who struggle with food allergies know that they are some alarm symptoms to watch out for. Examples include difficulty breathing, fast heart rate, wheezing, hives, and a serious rash. For those with serious food allergies, they may even carry around an EpiPen that they can inject themselves with in case of an emergency. Many people are born with their allergies; however, a bite from a tick can also lead to a meat allergy. Recently, a professor from the University of North Carolina at Chapel Hill in the Department of Allergy and Immunology discussed this dangerous allergic reaction.

Those who are allergic to meat often talk about getting hives, itching, and swelling; however, they would also have serious GI symptoms, such as vomiting and diarrhea. This sets this allergic syndrome apart. Many people are winding up having to go to the hospital. This unusual reaction was first described a decade ago; however, all of the patients had a singular thing in common. All of them had been bitten by the Lone Star Tick.

In the meat, there is a sugar called alpha-gal. It is this specific type of sugar which causes the allergic reaction. There is a high rate of meat allergy in the Southeast, particularly in the Carolinas and Georgia; however, patients have been reported all the way up into New York State. It is not a coincidence that all of these cases are located in areas that are endemic to tick populations. Many of the other tick-borne illnesses, such as Lyme Disease and Rocky Mountain Spotted Fever, are seen in these locations as well. Over the past few years, the geographic range of this allergic reaction has started to spread. This is largely due to the weather warming up, becoming more conducive to ticks.

It is still unclear exactly why people develop an allergy to meat after being bitten by this tick. Research is still ongoing; however, what everyone should remember is that they should seek medical attention if they start to feel severe symptoms. This Alph-Gal syndrome can vary in sensitivity from person to person, with some individuals actually being unable to eat any animal products at all. In severe cases, people could have trouble breathing, which could be life-threatening.

In the end, ticks carry a wide variety of dangerous diseases and pathogens, such as Lyme Disease and Rocky Mountain Spotted Fever; however, it is important not to overlook the impact that a meat allergy from a tick bite can have. An inability to eat meat can lead to a precipitous drop in someone’s protein and iron intake, which can lead to a low muscle mass and anemia. Because of this, people should remain vigilant when they spend time in the outdoors, particularly in the long grass. Ticks are very small and can be hard to spot and everyone should do a thorough search for ticks after spending time outside. Lastly, if people start to develop any symptoms of tick exposure, such as a fever or a rash, they should seek care from a medical professional immediately. The diseases that ticks carry can be deadly and should be treated as quickly as possible.