Pros and Cons of Going Vegan 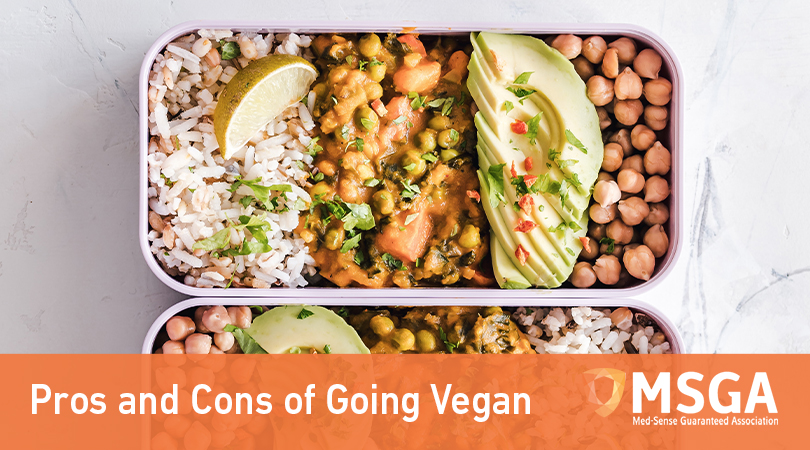 Most sources that tout the pros of going vegan mention the healthy cardiovascular benefits, and lower risk of developing diabetes. Other pros likely leads some individuals to change their diet to that of a true vegan. Vegetarians include dairy, and eggs in their diet, while vegans exclude all meat products from their diet and lifestyle.

One pro related to going vegan is the environmental benefits. Results of a study published by the Proceedings of the National Academy of Sciences (PNAS) indicates that eating a plant-based diet:

Another pro is the fact that in a study involving 840 participants, results show that when compared to individuals following one of several vegetarian diets, vegans fared better in reducing their risk of developing serious medical conditions. Vegan study participants had higher levels of compounds that reduce inflammation, higher biomarkers that prevent cancer and hypertension, higher levels of antioxidants, and Omega-3 fatty acids, compared to the other groups.

The BBC recently revealed the seriousness of eating a poor diet. A 17-year-old British teenager actually went blind after consuming a strict diet of a certain brand of potato chips (crisps), fries (chips), and white bread. Doctors attribute the blindness to his refusal to change his eating habits, which resulted in severe vitamin and mineral deficiencies, and malnutrition damage.

While there are many pros associated with going vegan, there are some cons to adopting a vegan lifestyle. One example is that choline, most often present in animal foods, is a crucial nutrient likely lacking in a vegan diet. The nutrient is important in liver function, and in brain health, including during fetal development.

There are other cons related to going vegan, including:

There are outstanding benefits of going vegan, along with some cons. Following a vegan diet potentially helps you lose weight, and experience improved health.

Check with your physician before starting a vegan diet and lifestyle, particularly if you currently experience any medical condition.