Does weather really affect our experience of pain? 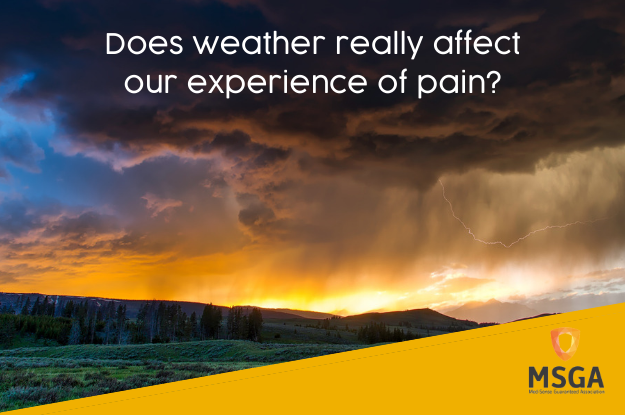 A recent study from the University of Manchester in the United Kingdom has found that weather actually can have an impact on how certain people experience pain.

The study found that people with chronic pain, caused by conditions like arthritis, can have more severe symptoms during humid, windy days with low atmospheric pressure.

The study showed that the age old wisdom that weather changes how we feel pain just might be true.

According to the study, “Approximately 75% of people with long-term pain conditions, such as arthritis, believe weather affects their pain.” As it turns out, there might be some truth to that old belief.

We’ve all heard that same folk wisdom from our parents and grandparents. That the weather causes their chronic pain to act up. The study specifically found out that this is true for a few specific weather conditions.

The research team found that humidity, rainfall, and atmospheric pressure could be driving factors in how weather affects chronic pain conditions. When asked about other weather conditions such as cold, the researchers stated “We wouldn’t discount people’s experiences” which leaves the door open for further work in this area.

This study is important as it adds legitimacy to folk wisdom.

The study is playfully called “Cloudy with a Chance of Pain” but the name shouldn’t fool you, this study is very serious. The researchers examined over 13,000 people from every corner of the United Kingdom to track their chronic pain conditions. Participants were asked to download an app and answer questions about their pain and discomfort levels on a daily basis. The app also tracked users location and the weather for that area. Even after the end of the study, participants are still using the app for their own benefit. As the study is now concluded, the app is not open to further downloads.

The researchers found that there was a strong enough relationship between pain and certain weather conditions to conclude that they did have a causal relationship.

What this Means for You

This study has wide reaching applications for managing the pain of people with chronic conditions.

The research team mentioned that an early application of this data might be to include a “pain forecast” along with the weather. This would give people with chronic pain conditions a better sense of what was in store and how to prepare for the day. This is particularly helpful for the elderly and individuals with severe conditions that have difficulty getting around. It’s also worth noting that the app that was used in the study also helped people manage their chronic pain which is an incidental bonus.

Thanks to this study, next time the weather takes a turn and a loved one mentions their chronic pain, you know science has their back!