Benefits of Barley and Nutrition Facts 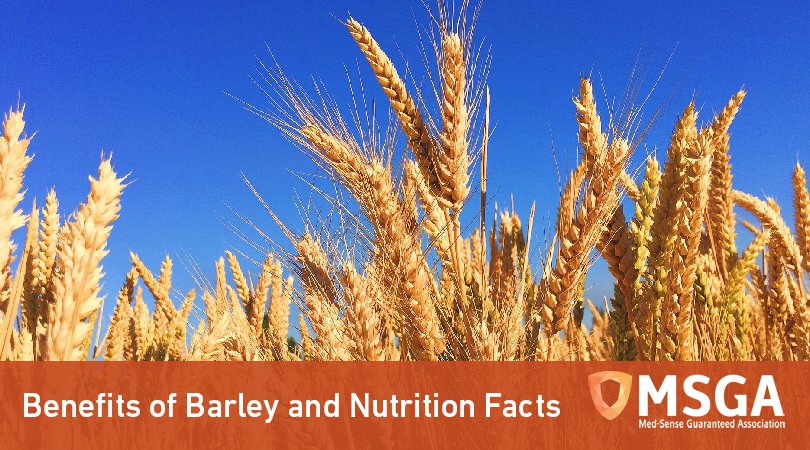 Barley is an excellent source of both insoluble and soluble fiber, which assures long-term overall health. Most of the benefits of barley occur because of its high concentration of eight essential amino acids that represent the body’s complete protein requirement.

Promotes Intestine Health- Barley is an ideal source of dietary fiber that helps the system flush toxins. This grass provides a fuel source for good bacteria needed by the large intestine. In particular, one byproduct of this fiber, as it ferments, is butyric acid – a primary fuel used by intestinal cells. A healthy colon depends on this process.

Prevents Osteoporosis – Barley grass has a high copper and phosphorous content that promotes overall bone health. The juice of barley has 11 times more calcium than cow’s milk. Barley juice is also rich in manganese which is needed for normal bone production as well as with iron deficiency.

Protects Against Gallstones – As a rich source of insoluble fiber, barley works to reduce acid secretion. Controlling bile increases insulin sensitivity and lowers triglyceride levels. According to the American Journal of Gastroenterology, women who consume a diet high in fiber have a 17% lower risk of gallstones as compared to other women.

Stabilizes Cholesterol Levels – A study published by The European Journal of Clinical Nutrition suggest that the beta-glucans in barley are helpful in lowering LDL cholesterol levels.

Prevents Asthma – A condition known as Baker’s Asthma Disease, most prevalent in bakeries and confectioneries is caused by the barley endosperm protein, 14.5 kDa. According to the Plant Molecular Biology journal, barley is an excellent preventive measure in Baker’s Asthma Disease and other wheat-flour allergens.

A Frontline of Defense Against Cancer

The Institute for Preventive Medicine, Nutrition and Cancer, Folkhälsan Research Center in Finland has produced firm evidence that the plant lignans in barley have anti-carcinogenic properties. The grain also contains certain types of phytonutrients known as plant lignans. These are transformed into mammalian lignans. One of those, enterolactone, helps to prevent breast cancer

Pearl Barley – available in most grocery stores and is actually hulled barley processed to remove the bran.

Barley Flour – made from ground whole barley and has a higher nutritional value than the pearl variety because it remains undamaged. Barley flour has a mild nutty flavor and is comparatively higher in fiber and lower in calories.

Barley Grass  – the seedling form is rich in vitamins, minerals, amino acids, and antioxidants. Barley grass has high levels of chlorophyll that detoxifies the body from harmful toxins.

Barley is not a magic cure, but it is certainly foundational to good overall health.